Before you go, check this out!

There's lots more to see on the site. Check out one of our most popular posts: 21 Easy Hacks to Instantly Improve Your Coffee at Home

At some point, most of us Procaffeinators will ask what a coffee bean actually is. Is it a bean? A fruit? Maybe it’s a berry? A nut? Is it a legume? Or maybe a seed? Let’s take a hard look and find out where the little marvel that makes our favorite beverage comes from.

We call it a coffee bean, but to be strictly correct, it is the seed of the fruit of the coffee tree. * Nothing more, nothing less. I grew over 7000 trees over the course of a decade on my farm in Hawaii, so I do know what I’m talking about. Should someone try to tell you differently you will be able to straighten them out with the knowledge I am about to drop.

* It’s not really a tree, either, but let’s not get ahead of ourselves.

Is a coffee bean a legume?

To really get at the root of this question and the ones that follow, we are going to have to define our terms. Botanically speaking, a legume is a very specific thing. You can tell when something is a real bean or legume when you see it growing in its natural state: it will be in a pod, like peas, soybeans, and peanuts. These pods split open when they mature, exposing the (usually) multiple seeds. You can pop a pea or bean out of its pod and, given the proper conditions of water, sun, and soil, it will grow into a plant. Put simply, while all beans are seeds, not all seeds are beans. Coffee falls into this second category.

Is a coffee bean a nut?

Unlike legumes, nuts do not split open when mature. They have a hard, outer shell that only opens when they germinate or are forced open by your nutcracker. Additionally, unlike legumes, nuts tend to only have a single fruit inside. Examples of nuts that can truly fit the botanical classification are pecans, hazelnuts, and acorns. Surprisingly, walnuts, pistachios, and almonds are NOT nuts! And neither is coffee, despite the popularity of “Chock Full of Nuts” coffee. * Keep reading to find out why.

Is a coffee bean a berry?

Well of course not. We’ve already gone over this. But the fruit of the coffee tree, historically, has often been called a berry. Because the word berry has been used for centuries to indicate any small fruit, in its more general usage it can refer to “berry-like things” which the coffee fruit is. Calling the fruit a berry is not strictly correct and will not win you a bet at the café or bar. In botany, the definition of a berry is a fleshy fruit in which all three layers – endocarp, mesocarp, and exocarp – are soft. Good examples of this are grapes or tomatoes. The endocarp (also known as the parchment) of coffee is hard, so it does not qualify as a berry.

Yeah, that’s right, a tomato is a berry. So are bananas and eggplants. But strawberries, raspberries, and blackberries are not!

Is a coffee bean a fruit?

Again, no. What we call a coffee bean is the seed of the coffee cherry, which is the seed-bearing body formed from a flower. That makes it a fruit. When ripe, it is red, although some varieties are more purplish, and some are even yellow. It has a thin skin, thin pulp, and a large “seed to total volume” ratio. That’s okay though because the fruit is not the prize here. Since there is not much “fruit,” even though it is edible, little is done with it. It is usually composted to give back nutrition to the soil. Some Kona farmers have been known to use it to make jelly to sell at the farmers market and others make a tea from the skins removed during processing. But the real star is the seed itself.

Even calling it a fruit is not really correct!

Botanically, a coffee cherry is a “drupe” or “stone fruit.” A drupe is a fruit that does not split open to release seeds when ripe and that has an outer fleshy part surrounding a shell of hardened endocarp with a seed or kernel inside. That’s the same category that peaches, walnuts, and almonds find themselves in. You could win a bet with that information!

So, to wrap this up, what we think of as a “coffee bean” is actually the seed of the coffee cherry, a “stone fruit” of the coffee tree (which is not actually a tree). Coffee cherries are similar to walnuts in that they are not actually nuts. A coffee bean is not a “bean” like a green bean, and even though some people have called it a berry, it’s not actually one of those, either. And don’t try that “well if coffee is a fruit, then a cup of coffee must be fruit juice” nonsense. It’s not. If I had a nickel for every time I have been queried on this topic, I could buy one of those ridiculously expensive espresso machines. We coffee lovers are definitely a curious lot and some of us love to be pedantic. Keep those questions coming!

I wrote about this before. That post is here.

I am Tim Bruno, a former Kona coffee farmer promoting the soon to be released Procaffeination: A Coffee Lover’s Dictionary and several other coffee-related products. I will soon be adding a YouTube channel to my efforts. Stay tuned!

link to What is Specialty Coffee?

Now that things are opening up we can return to our favorite cafés and coffee shops. Think of how this will improve our coffee prospects. We will have ample opportunities to sample coffee grown in...

You're standing at the counter of your favorite cafe, ready to buy your usual cup o' joe. You wistfully glance at the seemingly endless choices on the menu board and consider branching out... but...

Procaffeination is a place to learn a little about coffee, coffee history, and coffee science. A great spot to waste some time while having a cup of our favorite caffeinated beverage. 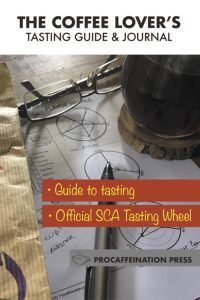